In the year before the signing of the Declaration of Independence, John Adams discusses with James Warren his views on women in politics and the necessity for him to return to private life.

She must certainly have misinterpreted Some Passage in my Letter, Since I never thought either Politicks or War, or any other Art or Science beyond the Line of her Sex: on the contrary I have ever been convinced that Politicks and War, have in every Age been influenced, and in many, guided and controuled by her Sex.

Influence of the sex.—Efforts to get powder and saltpetre.—Accounts of the Province against the continent.—Urges a change in the delegation.—Wishes to retire, and the reasons. 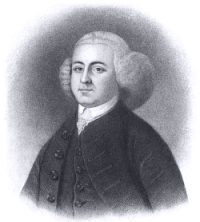 THIS afternoon and not before I received a Line from the excellent Marcia, which [is] the first and only Letter I have received from the Family to which She belongs Since I left Watertown. Be pleased to thank her for this Favour and to let her know that She must certainly have misinterpreted Some Passage in my Letter, Since I never thought either Politicks or War, or any other Art or Science beyond the Line of her Sex: on the contrary I have ever been convinced that Politicks and War, have in every Age been influenced, and in many, guided and controuled by her Sex. Sometimes it is to be feared by the unworthy Part of it; but at others, it must be confessed by the amiable and the good. But if I were of opinion that it was best for a general Rule that the fair should be excused from the arduous Cares of War and State; I should certainly think that Marcia and Portia, ought to be Exceptions, because I have ever ascribed to those Ladies, a Share and no Small one neither, in the Conduct of our American Affairs.

I have nothing new to communicate. Every Thing, has been done, and is now doing, to procure the Unum Necessarium. I wish I could give you a more agreable account of the Salt Petre Works in this City. I fear they have chosen injudiciously a Place for their Vatts Vaults and Buildings, a low marshy Place which was lately overflowed by the Storm. Still We have Sanguine Accounts of the Skill and Success of Some operators.

Coll. Dyer produces a Sample of excellent Salt Petre made by two De Witts, one of Norwich the other of Windham, and he is confident that they can and will make large Quantities. Coll. Harrison of Virginia, whose taste in Madeira I know, and in girls I believe, and in Salt Petre I hope, to be much Superiour to his Judgment in Men, is very confident that they are making large Quantities from Tobacco House Earth in his Colony.

We are hourly expecting Intelligence from Canada, as well as Massachusetts, and from London.

My dear Sir, Let me intreat you to do every Thing in your Power to get ready the Accounts of all that our Province has done and expended in the Common Cause, for which they expect or hope to be reimbursed by the United Colonies. It has ever appeared to me a Thing of much Importance, that We should be furnished with those accounts as soon as possible. From present appearances, our Session will not be long and if We should not be furnished with the Necessary Papers very soon, We shall not be able to obtain any Reimbursement this Fall; and the next Spring We may be involved in So many Dangers as well as new Expences as to render our Chance for obtaining Justice, more precarious. You know that your Delegates have been here almost the whole Time since the Commencement of Hostilities, and therefore can say nothing of their own Knowledge concerning your Exertions or Expences but must depend altogether upon Information from the General Court.

This is really a Strong Reason for a Change in the Delegation.

We have been absent so long from our native Country as to be a kind of Aliens and Strangers there. If it is good Policy to re-elect one of the old Delegates, because he is personally knowing to what has passed here; it is equally good Policy to elect Some new ones, because they are Witnesses of what has passed with you. For my own Part, as my political Existence terminates with the Year, I sincerely wish to be exempt in the next Election. I long to be a little with you in the General Court, that I may see and hear, and feel with my Countrymen, and I ardently wish to be a little with my Family and to attend a little to my private affairs. To be frank and candid to a Friend, I begin to feel for my Family. To leave all the Burthen of my private Cares, at a Time when my affairs are in so much Perplexity, to an excellent Partner, gives me Pain for her. To leave the Education of a young Family entirely to her, altho I know not where it could be better lodged, gives me much Concern for her and them.

I have very little Property, you very well know, which I have not earned myself by an obstinate Industry, in opposition to the Malice of a very infirm Constitution, in Conjunction with the more pernicious Malice of Ministerial and gubernatorial Enemies. Of the little Acquisitions I have made, five hundred Pounds Sterling is sunk in Boston in a Real Estate, four hundred Sterling more is completely annihilated in a Library that is now wholly useless to me and mine, and at least four hundred Sterling more is wholly lost to me in Notes and Bonds, not one farthing of the Principal or Interest of which can I obtain, and the Signers are dying, breaking, flying every day.

It is now compleatly two years since my Business has been totally ruined by the public Confusions. I might modestly estimate the Profits of my Business before this Period at three hundred sterling a Year, perhaps more. I think therefore I may fairly estimate myself a sufferer immediately to the Amount of two Thousand Pounds sterling. I have purchased Lands, which these Causes have prevented me from paying for, and the Interest is running on without a Possibility of my paying it and I am obliged to hire Labour yearly upon my Farm to no small amount.

In the mean Time all that has been granted me by the general Court for the sessions of this Congress last Fall and this Spring has not defrayed my necessary Expences however strange it may appear.

The Conclusion from all this is, that I am rushing rapidly into Perplexities and Distresses in my private affairs from which I can never extricate myself. By retreating from Public Life, in some Measure I might preserve myself and Family from a Ruin, which without it will be inevitable. I am willing to Sink with my Country, but it ought not to be insisted on that I should sink myself without any Prospect of contributing by that Means to make it Swim. I have taken my Trick at Helm when it was not easy to get Navigators who would run the Risque of the Storm. At present the Course is plain whatever the Weather may be, and the prospect of that is much better than it was when I was called to assist in steering the Ship.

Used with the permission of Democratic Thinker.

The Last of the Bailey Brothers of WWII

The Man Without a Country – American Minute