Four Letters on the Important Subject of Government

An exchange of letters between cousins Samuel Adams and John Adams—written in 1790 and published in a small pamphlet in 1802—illustrates the differing political philosophies of Samuel, for the Republicans (Democrats), and John, for the Federalists (Whigs).

What, my old friend, is this world about to become? Is the millennium commencing? Are the kingdoms of it about to be governed by reason? Your Boston town meetings and our Harvard College have set the universe in motion. Every thing will be pulled down. 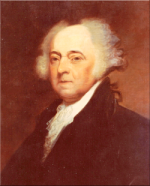 UPON my return from Philadelphia, to which beloved city I have been, for the purpose of getting a house to put my head in next winter, I had the pleasure of receiving your favor of the second of this month. The sight of our old Liberty Hall and of several of our old friends, had brought your venerable idea to my mind, and continued it there a great part of the last week; so that a letter from you, on my arrival, seemed but in continuation. I am much obliged to the “confidential friend” for writing the short letter you dictated, and shall beg a continuance of similar good offices.

Captain Nathaniel Byfield Lyde, whom I know very well, has my hearty good wishes. I shall give your letter and his to the Secretary of the Treasury, the duty of whose department it is to receive and examine all applications of the kind. Applications will probably be made in behalf of the officers who served the last war in the navy, and they will be likely to have the preference to all others. But Captain Lyde’s application shall nevertheless be presented, and have a fair chance.

My family, as well as myself, are, I thank God, in good health, and as good spirits as the prospect of a troublesome removal will admit. Mrs. Adams desires her particular regards to your lady and yourself.

What, my old friend, is this world about to become? Is the millennium commencing? Are the kingdoms of it about to be governed by reason? Your Boston town meetings and our Harvard College have set the universe in motion. Every thing will be pulled down. So much seems certain. But what will be built up? Are there any principles of political architecture? What are they? Were Voltaire and Rousseau masters of them? Are their disciples acquainted with them? Locke taught them principles of liberty. But I doubt whether they have not yet to learn the principles of government. Will the struggle in Europe be any thing more than a change of impostors and impositions?

With great esteem and sincere affection, I am, my dear sir, your friend and servant,

Used with the permission of Democratic Thinker.