Deep inside the National Defense Authorization Act (S. 1867) that the Senate is currently considering is a dangerous and unconstitutional portion that needs to be stripped out. Congress would grant the President the power to use the military in order to detain certain individuals, including American citizens, without trial or due process, indefinitely.

Section 1031 of the National Defense Authorization Act reads: “Congress affirms that the authority of the President to use all necessary and appropriate force … includes the authority for the Armed Forces of the United States to detain covered persons…. [including] [d]etention under the law of war without trial….” This “indefinite detention” section hands over to the Executive Branch the power to have the military arrest U.S. citizens.  No trial needed.  Simple suspicion would suffice.

This could be quite reminiscent of Stalinist Russia where a knock on the door in the middle of the night meant that the person taken by the military was often never seen again, perhaps having been imprisoned in Siberia or executed. The Japanese American Citizens League has warned that this measure’s detention principles are similar to the ones that sent innocent Japanese-Americans into concentration camps during WW II.

Sadly, this bill has already been passed in the Republican-controlled House of Representatives with nary a whimper by a 322-96 vote.   The excuse given for such an egregious disregard for the Constitution by supporters of the bill including authors Senators John McCain (R- Ariz.)  and Carl Levin (D-Mich.) is that the provision would strengthen and codify the legal framework necessary for dealing with “terrorists.” Other supporters insist that the language doesn’t necessarily include American citizens.

U.S. Rep. Justin Amash (R-Mich.) who voted against the bill in the House, thinks differently. Amash says the act would indeed “permit the federal government to indefinitely detain American citizens on American soil, without charge or trial, at the discretion of the President.” He notes that the language “does not preclude U.S. citizens from being detained indefinitely, without charge or trial, it simply makes such detention discretionary,” therefore it is misleading and outrageous. 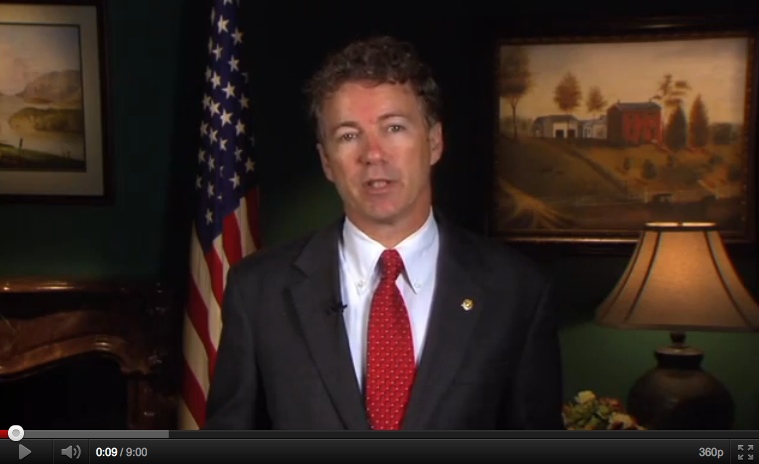 Sen. Rand Paul (R-Ky.) is speaking out in opposition to the “indefinite detainment” provision of S. 1867. He is also offering an amendment that would simply strike out Section 1031 of the bill. As this alert is being written on November 29, the Senate is debating S. 1867 and could vote on the Paul amendment this evening or tomorrow, November 30. A related amendment by Senator Udall to revise the detainee provisions of S. 1867 has already been defeated today by a vote of 37 yeas and 61 nays.

Indefinite detention without due process leaves citizens without the legal protection of the Constitution and strikes at the heart of the essence of U.S. law. It is positively shameful that any elected representative would even consider voting for such an assault on so sacred a fundamental value as the right to due process.

Far too much power has already been either usurped or given over to the Executive Branch under the guise of national security. Contact your Senators immediately and demand that they safeguard individual freedom and liberty by upholding the protections guaranteed by the Bill of Rights. Have them support the Rand Paul amendment that would completely strike Section 1031 from S. 1867, or any other amendment that would accomplish the same purpose.

If one or more amendments are added to S. 1867, it will likely go to a conference committee and then return to both the House and the Senate for a final vote.  So, a word to your Representative on this issue is also advised. Make sure you find out how he or she voted on the NDAA before getting in touch.

Used with the permission of the John Birch Society.

Double-Speak, Lies, and the Precedent Driving the Convention of States

APC: This Dangerous Bill Must Be Stopped!

7 Takeaways From a Senate Panel’s Hearing on Election Fraud