I know we’re still in deep sorrow over the Parkland, Florida high school shooting, especially as the funeral services for the seventeen killed will be happening. However, we still must keep our eye on the fact that we have a major issue of corruption in our federal government, and sadly, much of it centers around the FBI. The same FBI that blew the indicators and warnings on the Stoneman Douglas high school shooter.

Hidden in Robert Mueller’s indictment regarding a relative handful of Facebook ads run by Russians during the election is an absolute bombshell.

As reported by The Gateway Pundit, “After sixteen months of investigations and over a year-and-a-half of the FBI and Obama administration spying on Donald Trump, his family, his business, his campaign, his transition team and his administration — Special Counsel Robert Mueller dropped an absolute nothing-burger today in announcing charges against Russian operatives who sullied the US election process.

The indictment today contained the same Russian Facebook ads that were released in November 2017 by the House Intelligence Committee. Mueller and Democrats want you to believe these Russian Facebook ads flipped the election to Donald Trump. But at least half of the ads are pro-Hillary. And Russia claims half of their paid ads ran after the election and 25% never ran at all.

Then there’s this… The Kerry State Department approved the visas for the Russian operatives to travel the US in 2014 through 2016 and attempt to interfere with the US election process.” 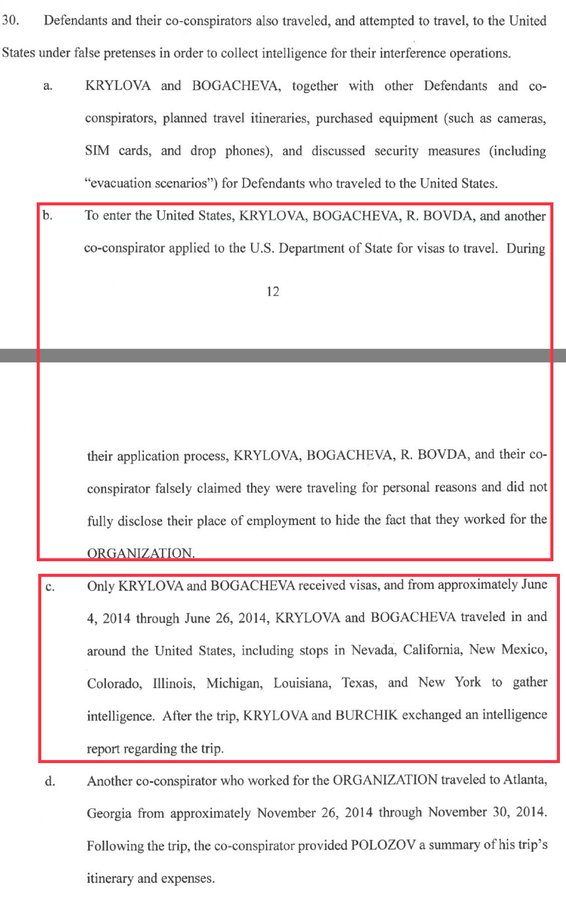 From #Mueller indictment, 2 of the Russians were able to enter U.S. on travel visas which they received after applying for them through the State Dept in 2014. From June 4, 2014 – June 26, 2014 they traveled around the US. Who was head of the FBI & State Dept at this time again?

Uh oh…John Kerry again? And let me ask a very rhetorical question, why hasn’t John Kerry been indicted and charged with violating the Logan Act? We detailed this for y’all about two weeks ago. At this rate, I could do a better job as U.S. Attorney General than Jeff Sessions. I certainly exceed the qualifications and abilities if compared with Loretta Lynch and Eric Holder. Doggone, why has Ms. Lynch not been issued a subpoena regarding her little secret convo with Bill Clinton on a hot Arizona tarmac…and Holder should be imprisoned for being complicit in the death of U.S. Border Patrol Agent Brian Terry — ya know, Operation Fast and Furious. So again, what exactly is Jeff Sessions doing?

Ok, I digress. What is up with this? Our U.S. Department of State allowed entry of Russian nationals who traversed our country and are now indicted in attempting to undermine our presidential election. What was the nature of their visit and did they declare such on their application? This also reminds me of the Kerry State Department blowing the fiancée visa application of one Tashfeen Malik, remember her? She was half of the Islamic jihadist couple that carried out the San Bernardino Christmas party shooting. It wasn’t gun control that caused that incident, it was again a lack of vigilance and government following processes and protocols, since Malik lied on her application…it was never followed up.

In this case, two Russian nationals, last name Krylova and Bogacheva, falsely stated they were entering the United States for personal reasons. Furthermore, they did not fully disclose their place of employment — ya think someone should have asked?

And how is it we wonder about immigration reform in America? No, I’m not talking about blatant amnesty for DACA recipients. I’m talking about cleaning up the mess that is our current immigration system in America — specifically, visa admittance. Of course, I doubt we’ll be hearing anything from the liberal progressive media about this little tidbit. And we certainly won’t hear anything about the fact that Mueller also divulged that no Americans were working with these Russians. Heck, there should have been more hoopla about the Obama administration deploying campaign operatives to influence the Israeli elections — oh yeah, that was under the Kerry State Department as well. And U.S. taxpayer funds were used for that election meddling.

Look, I’m no lawyer, and have never been a law enforcement officer. But, it doesn’t take either of those to recognize there have been multiple breaches of law and questionable actions. The final question is, are there any consequences? The only true collusion with the Russians from the 2016 presidential election cycle is with the Kerry State Department, Christopher Steele, Fusion GPS, the DNC, and Hillary Clinton.

Is Robert Mueller looking into that?

Editor’s Note: This column previously appeared at AllenBWest.com. Used with the permission of the author.

Lt. Col. Allen B. West is the former U.S. Congressman representing Florida’s 22nd District, a Fox News Contributor, a contributing columnist for Townhall.com, the former Executive Director of the National Center for Policy Analysis in Dallas Texas, and the author of Guardian of the Republic: An American Ronin’s Journey to Faith, Family and Freedom. Col. West is the third of four generations of military servicemen in his family. During his 22 year career in the United States Army, he was awarded the Bronze Star, 3 Meritorious Service Medals, 3 Army Commendation Medals (1 with Valor device), and a Valorous Unit Award. In 1993 he was named the US Army ROTC Instructor of the Year. Col. West believes it will be principled constitutional conservative policies, not politics, which will secure a sound economic future for Americans.

When “a little corruption” in Mexico goes too far

Charlotte Trucking Company Owner Fights for $39,500 Police Took From Him at Phoenix Airport

Brownback Case Is NOT Over: What Happened in the Police Brutality Case and What Happens Next

A Republic If We Can Keep It

Pittsburgh Retiree to Finally Get Life Savings Back from Federal Government

Institute for Justice Takes on Qualified Immunity Before SCOTUS

House Democrat Impeachment Rules Are Made For A Lynch Mob